Hooray!
At long last .... Emily the australorp decided we had waited nice and patiently, so today was her day. I took the side off the chook house this afternoon to clean it out - no egg, but holy cow what a mess in there ..... 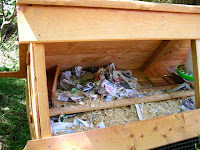 I knew something was going on, one of the lovingly-prepared (!) laying boxes was a wreck, the wood shavings all over and the newspaper underneath shredded to bits and thrown all over .... the laying box was actually moved (how strong are these chookies?)

So while we were pottering around the garden doing lots of planting, Emily started acting oddly, kept jumping back in her house instead of free-ranging. When she started re-arranging the eggbox I knew what was coming. And crikey I think the whole street knew when she was laying- what a noise! 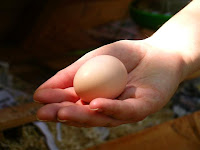 She emerged triumphant and we rushed like mad people to check out the box- there it was, our very first home-grown, perfect little light brown egg! Maybe only fellow chooky-people will get how excited we were, others maybe think we've gone a little loopy?

Anyway, we were very proud of her, and I was so impressed she even used the 'other/nice' laying box (they one they don't sleep and poo in!)
Hopefully the other 3 will catch on soon - one egg between 4 of us is a little meal ! 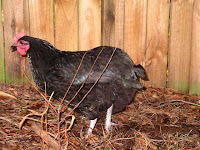 Posted by mountainwildlife at 9:57 PM

Hey thats fantastic news. I bet you felt eggstatic (sorry thats the one and only). How are you going to share it out?Best get the baskets ready- all the chooks will lay now.

Well done Emily.
The first egg certainly is a thing to celebrate.