Sad, sad news ..... our lovely rooster Racey died on Sunday. He developed fowl pox, which is relatively common in chooks, and usually not fatal, but he went downhill very quickly and died after having it only a few days. 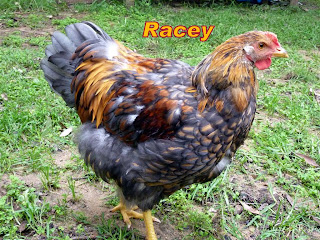 A young Racey before he grew in his beautiful long feathers
One of our hens, Lady, had it first, and had been sick for around 3 weeks. I actually thought she wouldn't survive the move from our old house up to their current residence at my friend's place, but she slowly improved and looks like she will be fine. I think she had a bad time of it as she was moulting at the same time, so she is looking a little rough and has lost a lot of weight.
Poor Racey though, we all loved him, he was such a beautiful wyandotte rooster, stunning to look at and very tame and friendly. I had hoped to breed him to the wyandotte girls and have some lovely chicks next season, but that was not meant to be. He was so ill that his eyes were swollen shut, so he wasn't moving around much or doing any normal behaviour. We tried to open his eyes but couldn't, to help him find food and water. He was managing to eat, but perhaps he wasn't drinking enough, or perhaps he was going to die anyway, we will never know. 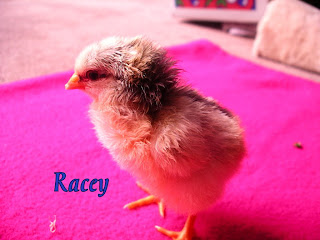 A few days after hatching- check out the hairdo!

He looked after his girls well, finding them food when they were free-ranging and always keeping an eye on me when I picked the girls up! They were obviously loyal to him too, they were huddled around him when he died.


A sad end to an otherwise lovely Mothers Day. I was showered with cards and presents from my two littlies, including hand made photo frames they made at kindergarten, small gifts from the school fundraiser and even a collection of 'special rocks' from our garden LOL!! I am amazed they managed to keep it all secret! They were so lovely I was smiling all morning. Porridge and milo in bed, (in my new pj's and dressing gown!) bacon and eggs later, and some lovely treats from the local market. Yum!


We have all settled in to our new abode, it feels great to be living here. Moving was relatively painless, although we realised we have way too much 'stuff'. A big clear out ahead I think. We are all enjoying walking to school (most days when we are not in a mad rush!) while the weather is still above freezing.....!
Posted by mountainwildlife at 12:36 PM 6 comments: