We started this only last month- and have already eaten some of our efforts! We picked a small area (2m x 3m) of weedy lawn where the sun hits most of the day. I marked it out roughly and started to dig.... really hard work, the ground was so hard, dry and full of weed roots if was like digging carpet.

There was no way anything would grow in that, it was actually repelling water, so I dug in a bag of compost, 2 bags of cow manure and 1 bag blood & bone. 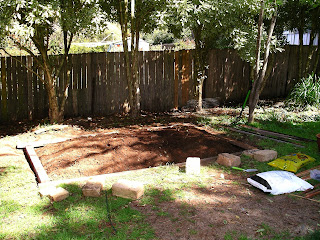 (no need for gym membersip this year!)


We made a border with some recycled timber sleepers, then topped them with some mud bricks, bushrock and old house bricks (total cost - nil)! 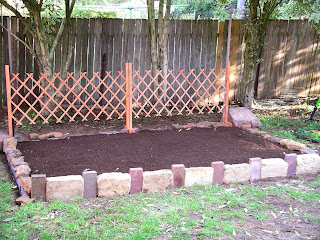 Some cheap lattice things at the back from the reject shop as trellis for climbing plants, and hey presto !

I had been trying my hand at seed raising for the first time (not fantastic results but enough to have something to plant! ) so some of them went in, and some seeds direct to the soil.

I have bought seeds from a few sources who sell 'heirloom' or 'heritage' varieties, sometimes organic, but always open-pollinated and non-genetically modified. These are the varieties of foods that used to be around generations ago, but have been 'culled' by supermarkets nowadays if they don't travel well (think hard strawberries!) or withstand extended periods of sitting in warehouses. (Did you know supermarkets generally won't stock apple varieties that have a shelf life of less than 4 months? Wonder how long it takes from the orchard to your fruit bowl?)
Heirloom varieties do however, have better flavour and extended growing seasons, so ideal for small home-veggie-gardeners!


There are plenty of online companies in Australia, but the ones I like are:


I also got some seeds from my native gardening tutor, and some from a swap I did on Aussies Living Simply http://aussieslivingsimply.com.au/


hmm ...think thats it .... oh, and a big flat rock in the middle so I can stand on it to reach everything!


We later put more stakes in the front and planted some climbing beans (Blue Lake) in front of the border wall (making use of all spaces!)


It's all doing pretty well , considering our local water restrictions and our lack of experience!

Have eaten the radishes (very proudly harvested by our kids) and bits of various lettuces.
Its still only mid Spring so the best is yet to come..... 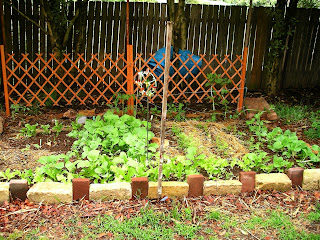 We decided to have a go at veggie gardening (like most people I know) because of the rise in chemicals/pesticides and other toxic substances used now, as well as the rising cost, and the fact that what is available to buy in the shops is often weeks or even months old (even if it looks lovely) and is often tasteless. We wanted to grow a few things as organically as we could to see if there really was a difference, and also just to see how easy/difficult it was.

So we started growing our first veggies in the winter... perhaps not the wisest but hey, its all an experiment! Besides, there was a 2-for-1 special offer coupon from oasis seedings (and I do love a coupon) so we bought -


and planted them into recycled polystyrene boxes (pick up free from fruit/veg shops), some old plant pots and also used our old recycling crate that the council had just replaced. 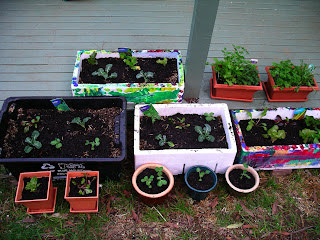 Ended up looking like this - note the colourful 'artwork' on 2 of the boxes, courtesy of our lovely kids. (note for future- kids paint will run everywhere whenever it rains outside!)

We planted into organic potting mix we bought in, as well as some of our own compost we make from garden waste and kitchen scraps . No chemicals or pesticides as we want to keep the food as 'clean' as possible.

Well, to fast forward a bit .... 4 months later and the herbs are going great, rocket and silverbeet did well too though nearly finished now. It seems the lettuces and broccoli were just there to provide food for the snails/slugs and keep them off the other stuff!

Anyway,we were pretty pleased with our initial efforts so decided we would GO BIG in Spring and do a real veggie patch! More about that later ....
Posted by mountainwildlife at 2:54 PM No comments:

Well the idea of creating this blog is to document some of the things we are doing here, like a journal, for ourselves and anyone else who is interested.

I am planning on recording our efforts at food gardening and keeping chickens (both of which are new to us!) and anything else interesting that comes up.

Hopefully I will get the hang of this blogging business, and after going over what we have done in the past few months, I will be writing in 'real time' and hope to upate this blog at least a couple of times a week.