Well it has been a whole month since  this challenge started - to eat only fair trade /slave labour free chocolate. 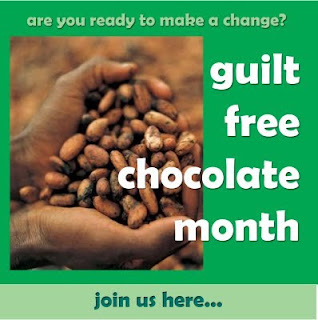 I have been a bit slack on reporting my progress, I did a week 1 update then seem to have lost the other weeks....! It wasn't because I had given up, only that lots of other things have been going here.

I have just read Dixiebelle's final report on her blog, and agree with her that some of the challenge was easy, but some a little tricky.

In my week 1 update I said that the things which caught me off-guard was the 'hidden' chocolate things like my morning milo drink, or having drinking chocolate shaken on top of my cappucino. I realised in that first week just how many products have chocolate in them that I might not otherwise think about. And the rest of the month continued pretty much the same ......

I had no problem sourcing fair trade chocolate bars (available in our local supermarket and also a fair trade stall at our local monthly market) although I have only tried one brand- cocolo. I am more than happy with that but will try some others when I find them.

Biscuits were never a problem as I've been making my own for a year now, since I decided to no longer buy commercial ones, so I know exactly what goes into them. I have made cakes (also only make my own) but only non-chocolate ones this month.

So that bit wasn't too difficult.

I have still had a few milo drinks, and still giving it to my children when they want it (how do explain to 4 year olds they can't have milo in case it has slave-sourced cocoa in it?) I'm honestly not sure how we change this one.

I have used normal drinking chocolate on my coffees, because I had it anyway, but will buy some fair trade when it runs out rather than continue buying it. Same with cocoa- I have a box still in the cupboard as I rarely use it, only for cooking. I can buy fair trade cocoa in a nearby co-op so will replace it with that.

And when a friend came round for coffee and brought some fantastic choc-mud cake she had made .... well I have to say it was the best ever mud cake. Hands up, I weakened on that day.

So I'd love to say it was all perfect and easy and I didn't slip up, but I suppose that's what a challenge is.

It has made me more aware of where another product is coming from and the issues around it. It has made me (and my husband) more concious shoppers. And finally it has converted me to fair-trade chocolate bars, which is the major source of chocolate in our home, so we have changed our buying habits again and I'm happy about that.

A final thanks to everyone else who took the challenge, and to Dixiebelle for starting it!

:)
Posted by mountainwildlife at 3:18 PM

I found some fair trade drinking hot chocolate through Oxfam. Yet to try as need to buy a milk pot first. I could pop over fo afternoon tea and bring some for you to try!

Thank you for participating! I did try explaining these things to my 4 year old, who sort of gets it, but at the same time, her 4 year old mind can so easily skip over any of the details if they stand in her way of getting what she wants! I aim to reduce and replace with the kids chocolate products... but I am also a realist and know there will be times that the sanity saver of giving them a treat/ bribe will unfortunately outweigh my desire to do the right thing.

But, yes, trying to be more aware and do the right thing as much is possible is what I amim for...