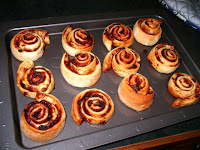 I never intended this blog to have much baking in it - after all, I never baked anything until a few months ago unless it came out of a box - but here we are, another recipe!

Its just my style- not too many ingredients, simple instructions, no mixer required, and if it ends up looking messy you can say it was meant to be! Oh, and yummy with a cup of tea.

This recipe is in Linda Cockburns book 'Living the Good Life' about her quest to not spend any money for 6 months. (Its a great read, quite funny and full of inspiring ideas, though I'm not tempted to give up my spending just yet...!) 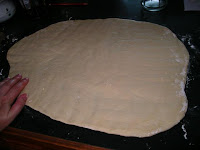 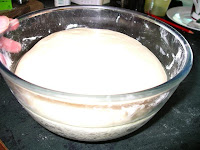 I have never made dough before so was pleasantly surprised that my first effort really worked, my 'dough ball' more than doubled in size in about an hour. Lots to roll out, this recipe made 12 large scrolls and around 8 smaller ones.

Microwave sugar, butter and cinnamon until melted. Set aside to cool.
In a bowl combine flour, yeast, sugar and enough water to turn it into a dough. On floured bench knead the dough until smooth and elastic.
Return it to bowl, cover with tea towel and set aside until doubled in size.
Preheat oven 180c, knock dough back then roll out into rectangle around 1cm thick. Spread melted cinnamon butter across dough.
With sharp knife cut into 3cm strips. Roll each into a scroll and place on greased tray. Bake until golden (around 15-20 mins on 180c)

*(I also added sultanas to this recipe, sprinkled on top of the cinnamon butter)

I am really pleased with my first effort, although the cooked dough didn't 'puff up' as much as I had expected, they are still a nice texture and taste good, perfect with a cuppa!

Posted by mountainwildlife at 10:18 PM