It is a little late, but I thought I'd post a few photos of our recent downpours ..... 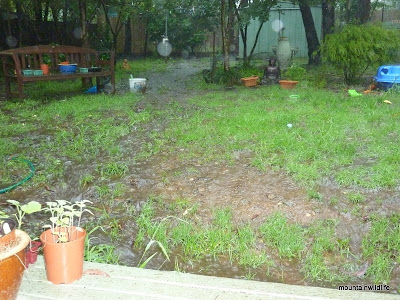 This is what happened to our backyard (and has again several times since this photo was taken) The photo doesn't show very well, but we had gushing surface water spilling down our backyard.
Although we do have a lot more grass than we did last year when the chooks made a moon-scape, we still had a huge amount of run-off and it all pooled when it reached the brick wall of our house ..... 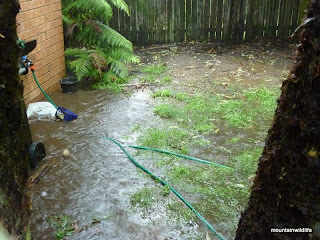 There is only so much water the earth can hold before it is totally saturated, then of course the rest gets washed down the slope as run-off.
Mother nature does not like patches of bare earth, and the recent rains have shown how much more destructive they can be without anything to slow the speeding water. Although we have a lot of tree canopy cover, we also have areas with nothing beneath the soil to drink up the water.
So now, where our grass was successfully growing back, it currently looks like this .... little tufts hanging on for life among the sandy, gravelly soil. 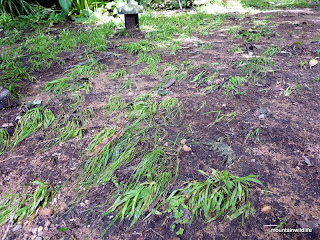 We were also affected, like many other mountain residents recently, by the landslides due to the rains, and the resulting road closures and train derailment. Fortunately no major problems from these, just inconvenience.
Still, on the upside, our local park, which usually has a trickling waterfall at the top, is now in full-flow and looks fabulous. 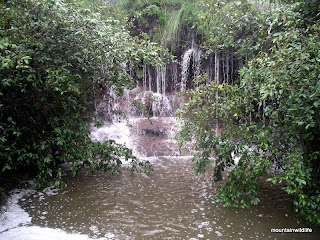 Posted by mountainwildlife at 3:21 PM

Wow! Which park is that?
Did you see my photos of the landslip in my house. We are still not fully recovered.

Oh dear, you got hit hard too didn't you?
The park is opposite Lawson pool, usually has a little trickle running over the rocks, unreal at the moment! But ssshhh, keep it quiet, no-one much goes when the pool is closed or cooler weather!

Love the tree ferns, but WHOA on the deluge. That's some hefty flowing water in your backyard.

Did it affect the house ie: moisture coming through the inside wall?

It's good to get rain, but the deluge type stuff can be worrying.

Hi Chris, yeah I'm truly over the wet stuff! Only so much I can feel thankful for.... We did get a fair bit of damage through the roof leaking, damp patches on the ceilings, not good. We haven't looked under the house yet, I expect it looks like a landslide..... :-(

Hi - I don't know if you can build swales on a suburban block, but you might want to find out! They would help with avoiding water run-off, and get the water going down deep into the subsoil, where it can do most good.

Bill Mollison talks about them briefly in his permaculture books, but I am sure you can find more info about them on the net.