The past couple of days I have noticed a couple of areas in the back garden have been mysteriously overturned ... too small an area for our dog to be the culprit, and our 2 chooks haven't been out of their fenced off corner. So we thought maybe a possum....?

But today our cheeky visitor showed his face - and his HUGE body !!! 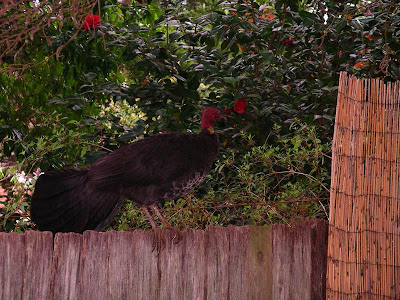 He was running around our garden like he owned the place, then after a quick chase from our dog (with some panic on my part!) it jumped up onto our fence. Initially we thought it was a lyrebird while it was racing around, but once it settled we could see it was very different. (BTW- I know its a 'he' from the colouring- yep, we are nerdy enough to own a field guide to birds!)

As far as I know, brush turkeys are not usually found around our area. They are more common further north right up the eastern coast of NSW and Qld in warmer coastal-bush areas. I've certainly never seen one in the 10 years we have been living in the mountains.

Anway, he was helpful enough to stay perched on the fence long enough for me to get a few photos, then he hopped off into next door's garden and away. He had obviously been here before and was not at all bothered by us. I also realised later that our dog obviously hasn't been too bothered about the turkey's presence either (until we got all excited -oops!)

Despite their tendancy towards destruction, it was really good to see a brush turkey in the garden! (I am sure those who have them all the time will definitely disagree!)

In other news ....... on Friday night I went to Star City with a couple of friends to see Mamma-Mia- the musical, on its opening night. What a fantastic show! I am still smiling :)
It was a great night out, with a quick dinner before the show and then almost 2 and a half hours of amazing performances.


The cast were brilliant, very, very funny! Lots of dancing and of course - loads of Abba songs woven into the story, which was done really well.

If you liked Abba even a little bit- you will love this show! And I defy anyone to not at least do a little jiggling in their seats, if not a full-on dance in the aisle!

My Abba Gold CD had a dusting off and been played today, and my kids were dancing their little legs away, arms waving and bums wiggling! (I don't know where they learnt to dance like THAT! lol!)

The show started on Friday and will be touring Australia for almost a year, and in Sydney until next Feb. Get some girlfriends together and go see it - release that inner-Dancing Queen !!
Posted by mountainwildlife at 7:32 PM

Wonder if they're the same turkeys that popped in to see us a couple of months ago? I was stunned to see them swanning around the suburbs bold as brass. Only saw them once though.

How's the wee chickie? I have been following a couple of health threads on BYP, chook keeping isn't as easy as you'd think is it.

My baby Dotte doesn't look marvellous either, she looks much rattier than I think she should.

Ha! Such characters they are!...destructive characters. I love them.
I also love Mama Mia...fun!

Hi ladies! Chicks are hard work greenfumb- 2 are not so good with dodgy legs, I'll blog about them later but I don't like the way its heading...
Hope Dotte picks up soon.
x