Well I've been away from blogging yet again (as all bloggers know, so easy to do!)
First we all had the dreadful flu -by the time it had been through all 4 of us, it was 2 weeks long....
But then- hurray! We were all well just in time to celebrate! Our twins turned 4 just over a week ago (wow, where did that time go?) and we had lots of celebratory-days ..... 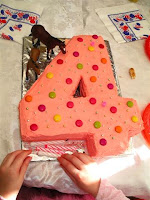 Firstly we took them to Sydney Museum on their actual birthday, to see, among other things, the fabulous dinosaur exhibition. It was well worth the trip and we all enjoyed it ... except for that scary mini-movie they show.... well I had no idea it would be quite so realistic. Hmmm, I think they need to put a 'not suitable for small children' rating on it. Anyway, everything else there was great and later we watched the sun go down (and the bats come out) over Sydney harbour. Beautiful. 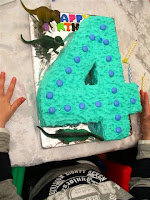 The following day we had booked pony rides for them both in Megalong Valley. It was a big surprise and they didn't guess until we pulled into the driveway and saw the beautiful horses, they were truly surprised, it was wonderful to watch their excitement. And they rode so well, while we just walked alongside, they were like naturals! (unlike me, who had wheezing asthma by the end. Oh, yes, still allergic to horses!) Never mind, it was worth it to see their happy faces.

The third day was The Party. Just a small one, less than 10 children and it went very well. Party food, couple of party games, lots of noise! (No red jelly, just natural noisyness!) Whoever invented those party blowers? And why did I buy some?
I thought that was the end, but when they went back to preschool on Monday I sent 30 little pieces of birthday cake (I made sooooooo much!) so everyone sang happy birthday to them once again while they shared.
It was a really lovely long weekend, and I'm glad we all got through it well, because .......

Happy Birthday little twins!!! Love the cakes - reminded me of one mum made me when I was 5. It was a pink elephant with smartie toes and shredded coconut. I picked the smarties off and got into lots of trouble. Sorry about the horrible flu - same thing happened to me. Had it for two weeks, was better for a week, got it for another two weeks. Now I have a cold but at least I can still do stuff. Now your big party wouldn't start with a 4 too would it? I had mine last year - nothing to do but celebrate. Hope your all better and cocktail-ready by then.

Thanks Jacqui, and hey- are you a smart lady or a little psychic? Or does my blog give me away?
(honey, do I look OLD in this blog? LOL!!)
Counting down ...3 days left ....!
Celebrations are a lot more low-key nowadays (for many reasons) but I will enjoy it and report back next week!