Well, our little chickies were 2 weeks old yesterday, and I've had a few requests for an update- so here it is!

(I had intended to do an update earlier, but our household has all been hit by coughs, colds and horrible croaky throat germs for nearly a week now, hubby having a week off work and trying to make the most of it, having a crisis about the non-building situation (long story) and the usual chaos that is our daily lives here. And I still don't have my own voice back!)

Bad news first - 2 of them have developed a 'slipped tendon' in the hock joint, which basically is a dislocation in the main leg joint. This is a fairly common event in young chicks (particularly wyandottes I recently found out) and although there is some disagreement amongst the experts about how it is caused the outcome is the same. It is not able to be fixed and the long term prospects are not good. Most breeders or experienced chook keepers will cull the chicks as soon as this happens.


Of course, we are having a hard time dealing with this. The two chicks I am sure are both hens which makes it worse as we would have kept them. 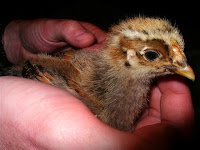 The first to have the leg problem was 'tiger' - our daughters favourite. She has the most beautiful feather patterning, all stripes and gorgeous colours, really stood out from the others. She has adapted a little bit by hopping around but often loses balance. 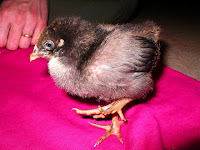 The second one was 'boss chick' the first born who helped all the others out of their shells and has a beautiful nature, and after the first few days I started to realise she was much more of a mother hen than a rooster.

We still have them, but probably not for long. As they grow it will be more difficult for them to have normal chooky behaviours such as scratching the dirt and foraging for food, perching to sleep and making themselves dust baths etc. Already they are last to get to the feed and sometimes get pushed out. I am trying to see that it is more cruel to keep them than to let them live but it is so hard!

So, of the 5 remaining I am convinced 3 are roosters now. 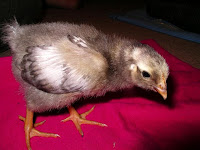 Big Grey has been confirmed by the breeder as a cockeral due to his colouring (they way his breeding program went he can tell this for this chick only) He is a gorgeous fluffy silver chick, very gentle for a cockeral.

Big Red  - I am sure is a cockeral too, he stands so tall, wide comb, very confident and bigger than the girls. 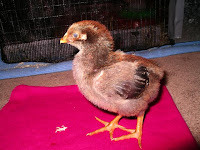 And Racer Boy- the most aggressive by far, likes to pick a fight with Big Red and let everyone know he is the top of the pecking order- literally. 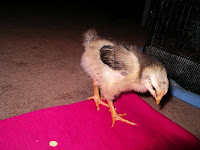 BTW- they still don't have real names - I thought that would be be good so we wouldn't get really attached to them yet. That idea didn't work :) 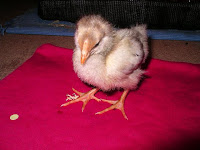 Little Blondie (my sons fave) is so cute - the breeder thinks she is a pullet (young hen) and I am sure she is a female too. Silvery blonde and has tiny gold bits coming through on her wings, she will be a beauty. Apparently she is a Blue Laced Gold 'Sport'- a much lighter than usual colouring. 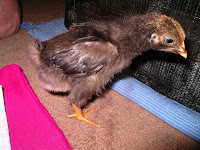 Goldie - hmm, not sure about this one. I'm thinking hen, I'm hoping hen, but not 100% sure. Comb is narrower than the boys. Size between hens and roos. Lovely chick all the same.


So we may end up with 2 good hens and hopefully keep 1 of the roosters too (I have a soft spot for Big Grey already!)

They are all showing off big wing feathers now and some are starting to show their shoulder feathers and spiky tail feathers coming through.

And they can fly. Did you know chickens fly? Oh yes, they can definitely fly. Blondie especially is a flightly little thing, leave the smallest gap in the brooder lid and she'll have a go. It's like having budgies! Ok they don't get very far, but they are quick. I'm hoping this will lessen when they get bigger and heavier....


They moved into their spacious new residence yesterday- Jacqui's rabbit hutch! Still indoors for a few weeks yet, and still with an infra-red heat lamp on at nights, and days when it is cool.

Hopefully will post another update when they are a month old. :-)

Posted by mountainwildlife at 10:58 PM

Looking gorgeous. Poor little chickies who are not so good with their leg.

What a shame about the poorly chickies, hope you are right about the girls, and maybe wrong about some of the boys, fingers crossed.

I am having a rethink on the Wyandotte front, seems like they are tricky, so I have ordered some Sussex eggs from Qld in 4 different colours. Can't wait.

poor little things - that must have been hard. I just love those little fluff balls - want to come over and bring some home! Wish we could have a rooster but not enough room. Glad the hutch is working out - we put a perch up the back of it by putting a piece of wood on the side that they liked to to jump on. I know exactly what you mean by flying - it's a bit of a surprise when it first happens! One thing really good is to get them used to you feeding them out of your hand if you can. Happy chickening & hope you're all feeling better soon.